From asbestos awareness to action in Penticton, B.C. 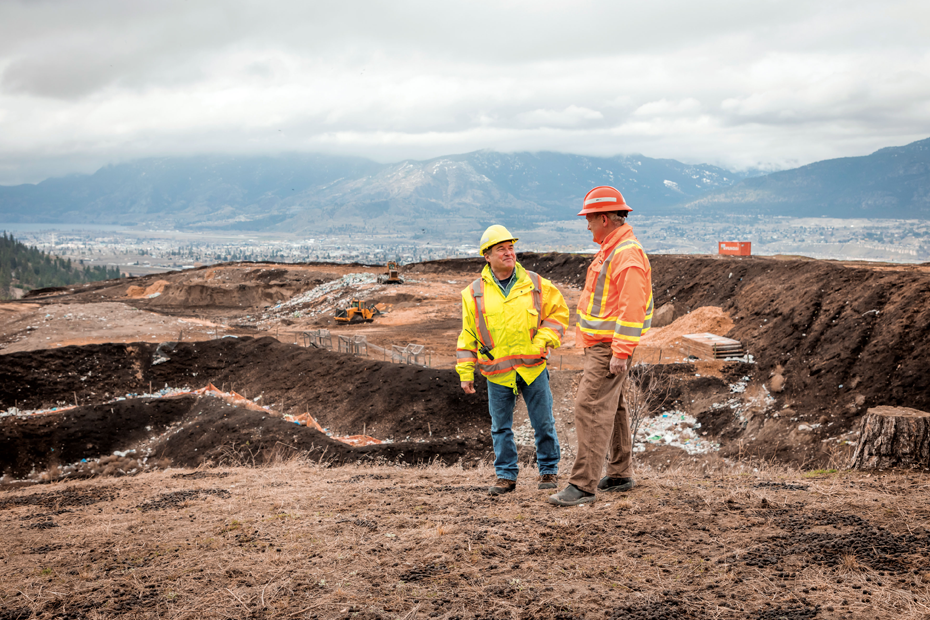 In this day and age, are city workers still at risk of asbestos exposure when they enter a demolition site? How about operators who sort demolition materials at the landfill? They might be, if regulations to prevent asbestos exposure are not being followed at the worksite.

To ensure the safety of their workers, the City of Penticton and the Regional District of Okanagan- Similkameen (RDOS) take extra measures to ensure that when a large pre-1990 building is demolished, regulations surrounding asbestos are being followed.

Occupational Health and Safety regulations require that an owner or contractor follow certain procedures when demolishing a structure. If the building was constructed before 1991, there’s a good chance it contains asbestos, a toxic fibre that was used in roof shingles, pipe insulation, acoustic tiles, flooring, stucco, gypsum board and joint compounds, vermiculite insulation, cement siding, soffit boards, and hundreds of other building materials.

Once all hazardous materials have been safely and properly removed, then a clearance letter is issued. Only then can a demolition proceed.

Even with these regulations, the City of Penticton and the RDOS found that before 2012, few contractors and owners actually checked for on-site hazardous materials. They wanted to change that by taking an active role in prevention, says City of Penticton building and permitting manager Ken Kunka.

“Contractors have to ensure regulations are followed in order to keep their workers safe,” states Kunka. “But prior to our initiative, we found that on the whole, there wasn’t an awareness of what needed to be done.”

Kelowna-based WorkSafeBC occupational safety officer Steve McCollum agrees that awareness on the whole was low. “Four years ago, you could go to almost any demolition site in the area and despite regulations, there would not be a hazardous materials survey done.”

Moving from awareness to action

To get owners and contractors to comply and protect their workers, the City of Penticton amended its bylaws in 2012. The new requirements linked demolition permits to adherence to the Regulation regarding asbestos. Now, owners and contractors have to show proof that they have conducted a hazardous materials assessment before they are granted a demolition permit for buildings larger than 10 square metres and built prior to 1991.

Over at the RDOS waste facilities, the goal is making sure that any demolition waste they receive doesn’t contain hazardous materials. They do this with a document called the Approved Waste Disposal Application (WDA). Section 3 of that application must accompany every load hauled to the landfill, and must be signed by the hauler. This tells landfill staff that the materials they are receiving have been assessed and don’t contain hazardous waste.

Not only are they protecting their workers, but they are protecting the environment too, says Janice Johnson, RDOS Public Works clerk. With the paperwork, they can monitor the amount of loads hauled and it “allows more materials to be sorted and recycled; reducing volumes buried and extending the life of the landfill."

“The main point is that we are both looking at the bigger picture,” says Johnson. “It’s all about protecting workers, and that means following a demolition from points A to C, from how it’s demolished to where it ends up.”

The idea to call for these extra requirements arose from concerns over unsafe demolition methods that put city workers at risk. When demolition material that potentially contains asbestos is carted off site, everyone along the way could be exposed to asbestos, especially landfill operators who are tasked with sorting.

WorkSafeBC occupational safety officers and hygiene officers met with the City of Penticton and the RDOS on several occasions to talk about occupational disease prevention, and the real risks to workers from asbestos exposure. WorkSafeBC claims statistics show that between 2006 and 2015 there were 584 work-related deaths from asbestos exposure in B.C. Within those statistics are workers who suffered from asbestosis, lung cancer, pulmonary fibrosis, or mesothelioma; and died as young as 60 years old. Because asbestos-related illnesses can take ten to forty years to develop, some think asbestos exposure is a thing of the past. That simply isn’t so, says McCollum. More than 400 workers in B.C. reported being exposed to asbestos in 2015.

For RDOS Solid Waste Facilities supervisor Don Hamilton, the meetings really hit home. “I wasn’t aware of how big of a problem asbestos was until we had those meetings,” he says. “This awareness led to a whole new step.”

Taking a firm stance on requirements meant facing pushback from owners and contractors. “We found that some contractors weren’t aware of their responsibilities and didn’t realize that asbestos could be an issue,” notes Kunka.

A few municipalities were also skeptical. “It was sensitive topic when we first started talking about this,” he adds. “Some municipalities felt that the issue was addressed by WorkSafeBC regulations, and that requiring this paperwork was beyond our mandate. But, we were able to make the case that this was a way to take reasonable steps to protect our workers, which is our legal responsibility.”

For RDOS building department supervisor Laura Miller, “education about the dangers of asbestos is key. It’s the best way to deal with pushback. Nobody wants to do extra paperwork, but if you explain why, they get it.”

The City of Penticton explained that this requirement for paperwork was not adding to costs or workload. It was simply a way to ensure that pre-existing hazardous materials regulations were being properly carried out by owners and contractors.

In addition, both the City and the RDOS attach WorkSafeBC asbestos awareness information sheets to their permitting information packages. “Homeowners who are doing the work themselves often have no idea about the hazards,” says Johnson. “At the RDOS, we still require an Approved WDA if a homeowner is doing all the work and hauling themselves, as it is our responsibility to protect landfill staff receiving the waste. Plus, it gives us the opportunity to educate the homeowner, so they can protect their family’s health.”

Now, infractions seem to be down, says McCollum. “There has been a dramatic decrease in the number of asbestos-related infractions because of this requirement,” he notes. “I have only seen two infractions on large buildings in the last two years. That is way down because of the help of the City and the RDOS. You can’t get a demolition permit, and then if you do knock it down without a permit, you have nowhere to take it.”

“We find more and more contractors and owners understand the dangers of asbestos now,” agrees Kunka.

Both the RDOS and the City continue to research policies, such as those created in the City of Nanaimo,B.C., the Cowichan Valley Regional District, and municipalities as far away as Australia, in order to make refinements to their requirements and accompanying documents. For example, the City is considering how best to extend a requirement to see these hazardous materials surveys not just for whole buildings, but for smaller renovation projects, while still ensuring owners will go through the permitting process.

“We’re looking to see what common-sense approaches other municipalities are taking,” says Kunka. “It’s good to be on the same page when we look at issues such as qualifications for assessment and abatement, costs, and compliance. When it comes to safety, it’s best to be proactive. This is an issue that affects all of us.”