Revised manual on controlling hazardous energy through de-energization and lockout

Every year, workers in B.C. are killed or seriously injured because machinery or equipment was not properly de-energized and locked out. This manual has been significantly revised to better help employers control hazardous energy in their workplaces and create a safe environment for their workers. 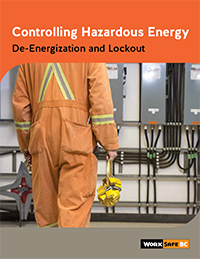 De-energization and lockout prevents the release of hazardous energy that could cause injury to workers. The updated Controlling Hazardous Energy: De-Energization and Lockout is primarily for employers, though the information is relevant for joint health and safety committees and anyone who operates machinery and equipment.

Updates include more comprehensive information on:

Controlling Hazardous Energy: De-Energization and Lockout is available to download or to order in print from the WorkSafeBC Bookstore. Anyone using the older Lockout manual should replace it with this revised version. Also note that the URL has changed, so users should update their bookmarks.

Visit worksafebc.com for more information on lockout and de-energization.