Ask an officer: The risks of aging equipment 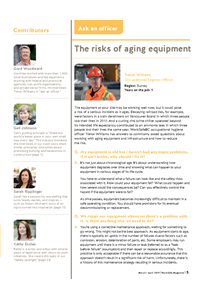 The equipment at your site may be working well now, but it could pose a risk of a serious incident as it ages. Decaying railroad ties, for example, were factors in a train derailment on Vancouver Island in which three people lost their lives in 2017. And a curling rink brine chiller operated beyond its intended life expectancy contributed to an ammonia leak in which three people lost their lives the same year. WorkSafeBC occupational hygiene officer Trevor Williams has answers to commonly asked questions about working with aging equipment and infrastructure and how to reduce the risk.