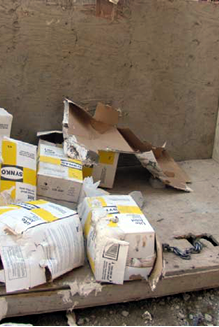 Incident summary
Boxes of drywall compound needed to be delivered to the second floor of a hotel under construction. The boxes were loaded into a job-built waste bin that had been placed unsecured on the forks of a telehandler. The telehandler was then elevated to a second-floor patio door. Workers inside the building began unloading the boxes through the patio door. Another worker entered the elevated bin to help unload; he had no fall protection. When about 10 boxes remained on one side of the bin, the bin flipped sideways off the forks of the telehandler. The worker in the bin fell about 17 feet (5 metres) to the ground and received multiple injuries. A second worker at the patio door fell forward, grabbed onto the forks of the telehandler, and was lowered to the ground; he sustained minor injuries.