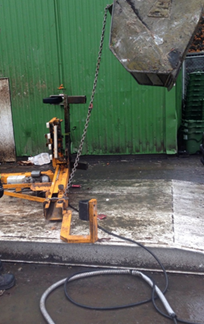 Incident summary
At a recycling plant, organic waste containers were being moved using a portable hydraulic tote tipper (referred to as a tipper — a device for emptying waste containers into a large bin). The tipper fell off the loading dock where it was stationed. Three workers attempted to lift the tipper back up onto the loading dock using a telehandler and a chain. A worker was beside the tipper, guiding it as it was being lifted. The tipper's base struck the top edge of the loading dock. The chain came loose from the tipper, and the tipper fell onto the worker, striking his head. The worker sustained a serious head injury.