Worker injured when pulled out of truck cab 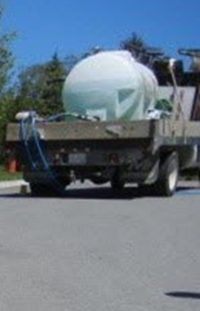 Incident summary
Two workers were using handheld wands to water boulevard trees in a residential subdivision. One of the workers was driving a flatdeck truck that contained a water tank. A deck-mounted pump supplied water through hoses to the wands. The driver finished watering trees and got back inside the cab of the truck. The driver continued to hold onto the water wand and proceeded to move the truck in a forward direction up the road, with the door remaining in the open position. While the truck was moving forward, it drove over one of the water hoses. The driver had to reverse the truck to free the hose from beneath the tire. While attempting to do this, the driver maintained his hold on the water wand and was pulled out from the cab of the truck. He fell to the ground and was run over by the truck. He sustained serious injuries.