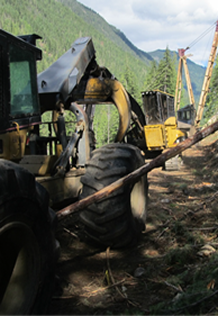 Incident summary
Workers were performing downhill cable logging (grapple yarding) at a forestry operation. A yarder was landing timber onto the single-width road, and a loader was forwarding the timber to a skidder that was just outside the cutblock boundary. The skidder operator was beside the skidder with the slope above him. A small, non-merchantable tree slid downslope, treetop first. The yarder operator and then the loader operator sounded audible signals to alert all workers of the potential hazard. The skidder operator, with his back to the slope and the runaway tree, began to move farther away. The tree continued downslope, went outside the cutblock boundary, and fatally struck the skidder operator.