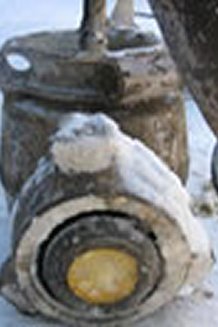 Workers were conducting hydraulic fracture stimulation processes on a gas well. During the process, the crew suspected that a hydrate (ice plug) had formed in the 2-inch diameter iron piping used to deliver pressurized nitrogen gas (N2) to the wellhead. The hydrate blocked the flow of N2 from pumps through the piping, so the fracturing process and pumping of N2 was stopped. Crew members bled off the N2 in part of the line to eliminate pressure.

In the attempt to address the blockage, workers attempted to take the piping apart by breaking the hammer unions on both ends of a 4-foot section of the iron piping, but they could not break the unions. They proceeded to move upstream to a valve and were able to break the union apart there, where they discovered an ice plug. The workers did not know that there was a second ice plug in a portion of the iron piping that was still connected to the buffalo head (a component mounted on the wellhead that allows multiple entry points into the well bore from different lines). Pressure was trapped in the line between the two ice plugs.

A steam line was brought in to warm the piping and thaw the ice plug that the crew had found. One of the workers continued efforts to break apart an additional part of the line by hammering. The ice plug released, and the sudden release of pressure caused a short section of the iron piping to lift the line off the ground and rotate uncontrollably. Two workers were struck by the rotating iron piping and sustained serious injuries.