Truck driver struck by log while bucking under trailer 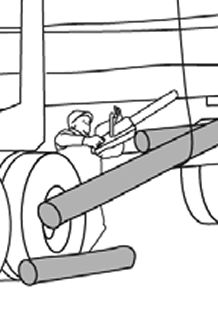 Incident summary
A driver of a loaded off-highway logging truck was hauling to a dry land sort. He was accompanied by the processor operator. Two binders secured the load, which extended above the height of the stakes on the log bunks. As the truck travelled along the road, the load shifted and two unstable logs fell from the top of the load and over the stakes. The two logs were suspended between the binders and the stakes. A short time later, one of the logs fell farther down within the binders and contacted the drive axle tires.

In an attempt to free the suspended logs from the binders, the driver positioned himself underneath the trailer, between the trailer reach and the logs, and began to cut the logs with a chainsaw. He successfully cut through the first log. Before he could finish cutting the second log, it snapped, and one end of the log suddenly swung under the trailer. The end of the swinging log struck the driver and pushed him backwards into the coupling receiver, causing fatal injuries.